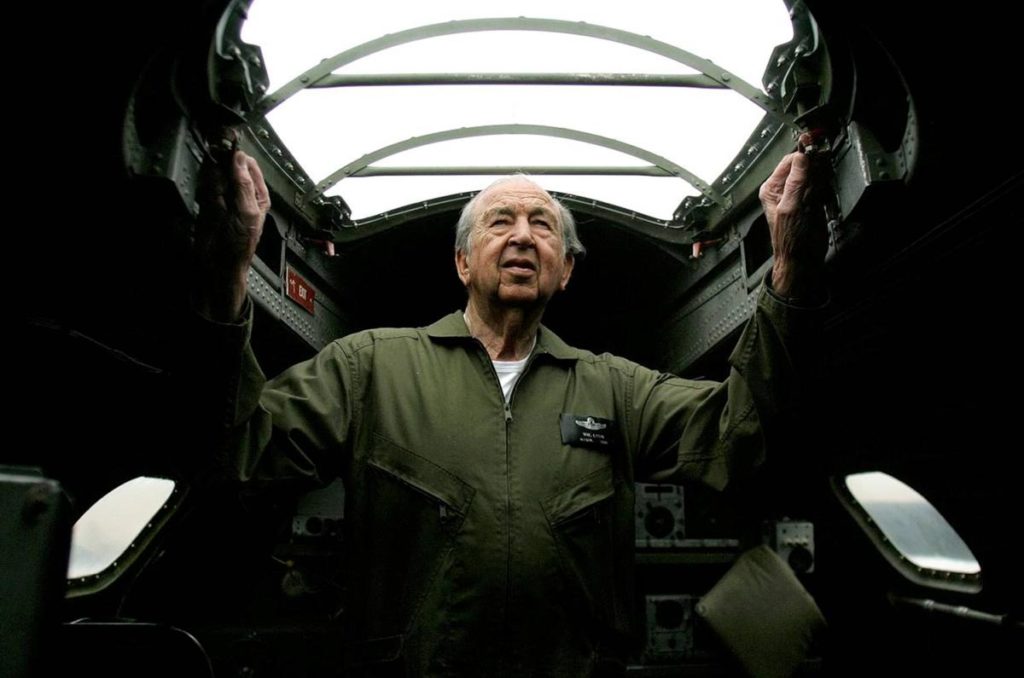 World War II-era B-17 bomber in April 2008 just before a two-day flight to Washington, D.C., to take part in a memorial celebration dedicated to U.S. airmen who died during the war. A former Air Force and commercial pilot, Lyon flew the plane himself but took a support crew with him. The man affectionately known as “the general” officially retired in February from the homebuilding empire he founded in 1954. (Register file photo by Mindy Schauer)

Net worth: $1.1 billion in 2016, according to the Orange County Business Journal, tied for 18th wealthiest Orange County resident.

Hobbies: Collecting classic autos and airplanes, some of which have been displayed at the Lyon Air Museum and the Peterson Automotive Museum. They include about 90 cars built prior to World War II, including Duesenbergs from the 1920s and 1930s, a 12-cylinder 1935 Packard and a 1939 Packard once owned by a Mexican president. His planes include a B-17 Flying Fortress that he once flew to Washington, D.C., for a memorial honoring U.S. airmen killed in World War II.

The official account says William Lyon and his older brother, Leon, founded a small Orange County homebuilding firm in 1954 to build houses for soldiers returning from the Korean War.

An unofficial version – as told by his son, Bill H. Lyon – was that Lyon’s father, Depression-era builder and Kahlua importer Al Lyon, wanted to get him away from the risky business of flying airplanes.

So veteran combat and commercial air pilot William Lyon hung up his wings in 1954 and co-founded Luxury Homes in Fullerton, the first of several homebuilding companies Lyon would run over the next 63 years.

In February, that era came to an end when the man affectionately known as “the general” stepped down from the board of directors.

Gen. Lyon, who earned that rank as commander of the U.S. Air Force Reserves in the 1970s, was 20 days shy of his 94th birthday when he officially retired.

It was part of an ongoing transition, long in the works, son Bill H. Lyon said.

The career that started with GI homes in Fullerton and ultimately housed thousands of families in Orange County and throughout the West made Lyon one of Orange County’s most wealthy and influential men.

He survived several market downturns, riding out the tough times by slashing inventories and staff and selling off land at a loss to raise capital. Lyon barely survived the early 1990s downturn. Following the housing crash of 2007, the Lyon family transferred a controlling interest in their firm to new investors, although the General retained his position at the helm.

In May 2014, Builder Magazine inducted Lyon into its Builder Hall of Fame.

“He’s a giant in our community. He’s built a name, he’s built neighborhoods, he’s built trust and discipline,” said John McManus, Builder Magazine’s editor. “His land acumen, his focus on homebuyers, his approaches to accessing capital, and his fiercely entrepreneurial spirit made his company a kind of academy for a couple of generations of homebuilding’s leaders.”

He co-owned and operated a regional airline, AirCal, and invested in hotels. He also was instrumental in creating the Orangewood home for abused and neglected children, with the building of Santa Margarita High School, the founding of the Republican New Majority, and the Segerstrom Center for the Arts and was a major donor to charitable groups and Republican causes.

Lyon was one of the three most influential men in Orange County, along with Irvine Co. Chairman Donald Bren and South Coast Plaza developer Henry Segerstrom, said Larry Higby, a former Nixon White House aide who co-founded the The New Majority, a Republican group, in 1999 along with Lyon, George Argyros, Bren and others.

“Not only was he a community developer, but equally important, he was a community leader,” Higby said of Lyon. “Bill was one of those unique guys who doesn’t just write a check. He gets involved, which is why he makes such an impact.”

Lyon is credited with building more than 100,000 homes in six Western U.S. states over the course of his career, a statistic that hasn’t been updated in about a decade.

“He was one of the great homebuilders,” said Tony Moiso, Rancho Mission Viejo’s chairman. “His mark on Southern California, especially Orange County, is hard to match. He has impacted many, many thousands of lives that probably will never meet him, never knew anything about him. But he impacted those lives very positively.”

The Los Angeles native fell in love with flying after a $1 flight at a Culver City airfield. He attended the University of Southern California, but the day after World War II broke out, he tried to enlist as a Navy pilot, his son said. He was rejected because he had a deviated septum.

He then went to the Dallas Aviation School and later managed to get into the U.S. Army Air Corps Reserves as part of an aircraft ferrying unit, delivering planes to war theaters around the world.

After the war, he became a pilot for Frontier Airlines, his son said, then he went back into active duty during the Korean War,, flying 75 combat missions in C-46 and C-47 transport planes.

“He got back home somewhere around 1954,” Bill recalled. “His father was trying to figure out a way to get him out of airplanes and do something less dangerous.”

Al and Leon Lyon were working together operating Guardian Thrift and Loan. William Lyon joined his father and brother in founding Luxury Homes.

After selling the company in 1968, Lyon retained control of a subsidiary, William Lyon Development, the first in a series of homebuilding firms that would bear his name.

But Lyon, who had been active in the reserves since the war, later got tugged back into active duty. In 1975 he was named commanding general of the U.S. Air Force Reserves, bringing his business skills to manage the division’s $700 million budget for the next four years.

In 1987, Lyon and investors purchased The Presley Companies, a homebuilding firm operating in California, Arizona and New Mexico that’s the predecessor to today’s William Lyon Homes. He also partnered in creating an apartment company with Western National Group. When the partnership split, Lyon and fellow investors continued to operate the apartment firm now called Lyon Living.

“Gen. Lyon is bigger than life. Everybody wants to grow up and be Bill Lyon,” said Western National CEO Michael Hayde, who recently stepped down as New Majority chairman. “People underrate him. They think of him as a homebuilder. He’s way more than that.”

One of Lyon’s greatest skills was as a charity fundraiser and recruiter for philanthropic causes, Hayde said.

“Kids were sleeping on mattresses on the floor,” Steiner said. “Things were bleak, very bleak.”

“Gen. Lyon said it was time to take these children to heart,” Steiner said. “I just credit him with being the heart and soul of this effort to help abused kids in the county. And we’re talking about thousands of kids.”

“For their ages, they’re doing remarkably well,” he said. “For my father in particular. His 94 is better than most people’s 74.”

Rancho Mission Viejo Chairman Moiso, 77, said Lyon “already was big time” when he got into the land development business. Lyon, he said, was his mentor.

One of the great joys of being a homebuilder, Lyon told Moiso early on, is going back to a project 20 to 40 years later and seeing something he helped put in the ground.

“Think about this,” Lyon said. “You have provided a place for people to live and raise their families and go to school and recreate and go to work. That’s really rewarding.”